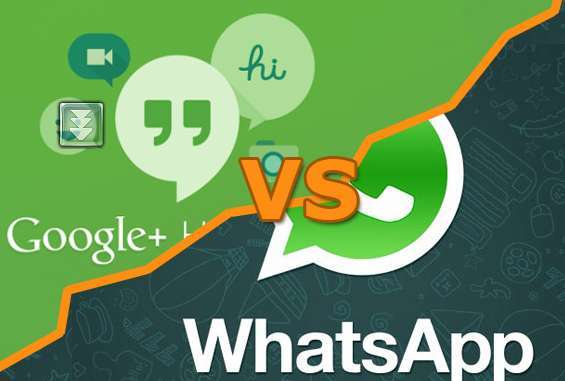 WhatsApp have 600 million users and 830,000 users sign up daily which means lots of users using WhatsApp that is why Facebook finally purchase WhatsApp in $19 billion.Facebook already has its own app like WhatsApp which name is messenger,Facebook doesn’t allow chat option in Facebook App everyone who uses Facebook App must have to install messenger.

WhatsApp,Hike,We Chat, Line, and Viber provide a cheap way to send text messages to friends or on other contacts.After the success of WhatsApp,Facebook purchase WhatsApp in $19 billion.Facebook and Google owners knows that these types of App surely change the world and market that is why Facebook paid $19 Billion for WhatsApp.

After Loosing WhatsApp in auction Google planning to launch its own messaging App to slow down WhatsApp and Facebook market and popularity.Everyone knows that Google develops always a good technology.Some days ago Google launch its low budget Smart phone Android one.With android one Google is trying to reach the users of developing countries.

If you using Kit-kat version of Android OS,an App which name has been Hangout already installed on your phone.Hangout is also a Messaging App which is Designed by Google.With the help of this App you can send messages,MMS to your friends phone’s or Google Plus’s profile.You can also Add your all Google Plus and Email contacts with Hangouts.With this App you can read All the messages and Emails at one place but Google new App is Different from Hangout and Quiet similar to WhatsApp.

This App will be looking like a Simple design and layout,from which you can send photos and videos.You just need an internet connection same as WhatsApp.

Google Officials decline to comment on this topic but according to The Economic Times,In an interview Google ET,Google executive Sundar Pichai says that India has a Great market where everyone wants to invest.

In India Whatsapp,hike and others Messaging Apps are famous and lots of people are using messaging App that is why Google will Launches its own messaging App in India First.

Date of Launching and Prices of App are not clear but Google Messaging App will be free for 1 year and after it charges Rs 53 annually.

WhatsApp Tips : Secure Your WhatsApp chat with these tips

How To Recover All Deleted WhatsApp Messages